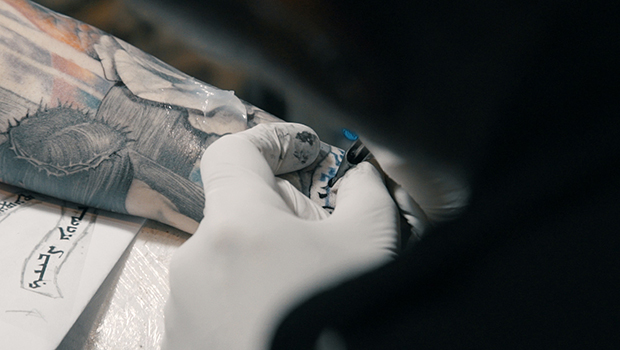 A bomb hits. The windows vibrate - and a few minutes later the needle continues to whiz. In a city full of conflicts, Poko Chaim and Daniel Bulitchev, two Russian tattooists, have created a place without walls. Here they perpetuate the stories of the inhabitants of Jerusalem; the ink under the skin connects them all. A look at their tattoos allows a completely new approach to the heart of the Holy City - its inhabitants.
The studio is open to everyone, regardless of nationality, religion or skin color. In the conversations under pain, which often come close to a confession, the customers talk intimately about their life in this controversial city, their beliefs and their fears in the never ending conflict which often is part of the everyday life.These are the moments that make Poko and Daniel psychologists and artists alike. In order to escape the constant noise of the needle, the tattooists repeatedly lead us to special places of the city: to the shore of Tel Aviv and - on their Harleys - to the mountains near Jerusalem.

Discussion. Signs on the skin: social and symbolical functions of tattoos

Discussion. Signs on the skin: social and symbolical functions of tattoos